Statue in tribute to Philip Parris Lynott - a fan's recollections 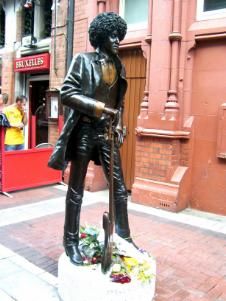 One fan's recollections: a message I received from a fan about his trip to Ireland for the official unveiling of the statue on August 19th, 2005.

Hi guys, just returned from a weeklong trip to Ireland.

We landed on Friday morning, after a sleepless overnight flight from New York, and immediately checked into our hotel and went right to sleep. Later that afternoon, we headed out towards Grafton Street, where the statue of Phil Lynott was due to be unveiled at 6:30pm. We planned to meet other Lizzy-ites at a pub, but once we noticed that people were already gathering early around the statue, we grabbed a place on Harry Street, opposite Bruxelles, and waited.

The statue was covered by a wooden box then. The statue is actually located on Harry Street, in front of a pub called Bruxelles, just off Grafton Street, Dublin's pedestrian-only main shopping street. There were police barriers around the statue for VIPs to gather, and I spotted Philomena and Dennis, and eventually Gary Moore, Scott Gorham, Robbo and Darren Wharton. I'm sure that Brian Downey and Eric Bell were there, but I didn't see them in the crush of people. Smiley Bolger and Brush Shiels were there, too. As the unveiling time got closer, the crowd kept growing (one Dublin newspaper reported the next day that 5,000 people were there). Some Thin Lizzy music was piped out to the street, and one fan yelled out "Are you ready, Dublin!", which got a big response. At 6:30pm, Jack Gilligan, arts officer for the Dublin City Council, introduced the Lord Mayor of Dublin, Catherine Byrne. The Lord Mayor recounted how, the first time she went to see Thin Lizzy, she missed the band because she'd passed out before the show! Then she said how wonderful it would be that, 100 years from now, people would still stop at the statue to remember Phil.

Philomena spoke next; she was very emotional. She thanked all the countless fans who helped to raise money for the statue through donations and tribute events. Then Audrey O'Neill of the Roisin Dubh Trust spoke next, and then it was time for the unveiling. The wooden boards came down, then the canvas covering over the statue, and what do you know? I'm facing the back of Phil's head! We eventually got around to the front of the statue, which looks towards Grafton Street, and it looks wonderful. Tall, rock-star skinny, with coat and tie billowing in the breeze, there's Phil standing with his bass guitar. Loads and loads of Lizzy fans in the crowd, and I spot several with Lynott tattoos. One woman had a tattoo of Phil on one arm, Scott Gorham on another arm, and the Lizzy logo, Black Rose and John Sykes on her back. I was afraid to ask where her tattoo of Robbo was!

The Lizzy members posed with Philomena around the statue, and then they disappeared into Bruxelles, with one exception: Robbo stayed outside for a long time. I shook his hand and got my picture taken with him, and then I met Soren, his manager, too. People were walking up to Robbo with all sorts of things to sign, and others were passing album covers and other things through the Bruxelles window to anyone who'd sign them.

Friday night, we were invited to an party at Liberty Hall. Roddy Cleere made presentations to Graham Cohen and Audrey O'Neill for all their hard work, and then he presented a black glass piece to Philomena. Thin Az Lizzy then took the stage and played for the next two hours. It was their first gig in two years. Wonderful band, from Ireland, and the singer does an excellent job at channeling Phil's voice. For Dancing In The Moonlight, and again for the encore of Baby Drives You Crazy, they brought out a special guest: John Earle on saxophone! John's not in the best of health, and he had to be helped on and off the stage, but he sat there with the biggest grin the whole time. Even Philomena got up to sing Whiskey In the Jar. I met more Lizzy fans from many countries, including Roger Costa from Toronto (I asked him to say hello to you, James). 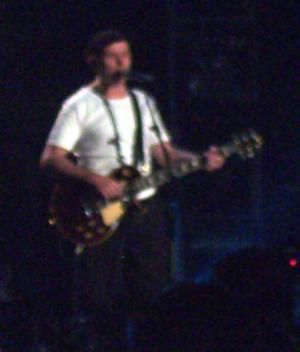 On Saturday evening, I completely misjudged the opening time for the tribute concert at the Point, so I missed Darren Wharton and Dare. Wheatus took a long time to get to the stage, due to technical problems, and they got a mixed response. They had to dodge a few water bottles, too.

The next band featured a mix of performers, including Neil Murray on bass (Whitesnake / Black Sabbath) and Johnny Fean on guitar (Horslips), and Fean really got the crowd going with "Trouble With A Capital T". Brush Shiels then came out to perform his tribute to Phil, "Old Pal".

Philomena came out to thank everyone for coming and to ask the crowd to sing "Happy Birthday" to her boy. Then we were told that it was time for the band we'd all been waiting for - and Thin Lizzy were introduced - but it was only Gary Moore, Brian Downey and Jethro Tull bassist Jonathan Noyce. Moore started with one of his own songs - "Walking By Myself". Then they headed into "Jailbreak", complete with sirens and red flashing lights, but despite the other Lizzys there, it was still all Moore. Gary said the next song had two versions, so he started into the slow version of "Don't Believe A Word", and then the fast version (without bringing on Robbo, who created the fast version). 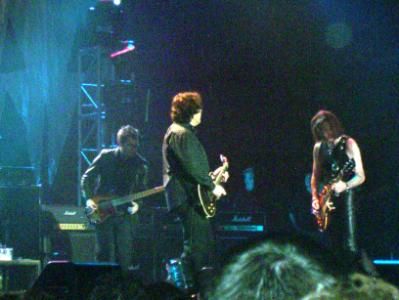 The Robbo, in black leather jeans, joined Moore for a charging "Emerald", and then they started into "Still In Love With You". Gary nailed the solo, while Robbo struggled a bit, but it was still wonderful. But that's all for Robbo - two songs and he's off - and then Scott Gorham is introduced. But Scott doesn't immediately come out, so Gary says, "There's always some f*****' c*** in this band who's got to be late". 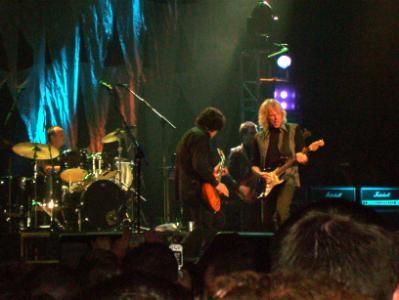 Scott finally joined Gary for the highlight of the night, "Black Rose". Scott really seemed to be enjoying himself, as he called out to the crowd and kept going face-to-face with Moore. They followed up with "Cowboy Song", and then that pregnant pause, and right into "The Boys Are Back In Town". This was a Lizzy crowd, but mostly an Irish crowd, and they were very loud. But then Scott was off, and Gary said that's all, good night.

After a short break, Gary said the next song was one that Phil used to say only Eric Bell could play... so out comes Eric Bell. They launch into "Whiskey In The Jar", with Gary and Eric trading off vocals. But it was only one song, and then Eric was gone.

Gary, now solo again, starts into one verse from "Old Town" ("In the old town, it's not the same, when you're not around"), and then he goes right into "Parisienne Walkways". He changed the first line from "I remember Paris in '49" to "I remember Paris in '69", which was the year that Gary and Phil played together in Skid Row. It really sounded incredible, but then Moore stretched out the ending far too long.

He finally wound it up with an instrumental version of "Happy Birthday", and that was it. Ten songs, no gathering of all the Lizzy guitarists on stage, no chance for Darren Wharton to join in, not even a mention of Phil by name (I do think that Eric may have said it once). And, of course, no Snowy White or John Sykes. It was a really good show, but it was not all that it might have been. 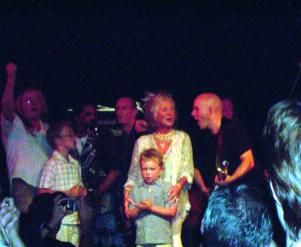 Philomena on stage at Liberty Hall

As we left the Point, we ran into Philomena and Graham, and they invite us back to their hotel. So we head to the North Star Hotel and have a drink in the pub, talking with two German brothers who came to the show, and then we headed upstairs to the Lynott gathering in the hotel's hospitality room. We met more people from more places (everywhere from Germany to California). Someone played guitar while others sang Lizzy songs; someone else presented Philomena with a wonderful drawing of Phil, and Philomena looked very happy.

As we left (at almost 4:00am), Philomena was singing to Smiley Bolger - I really don't know how she finds the energy - and she was inviting people back to her house the next day, but we didn't want to intrude any more, so we were off.

It was great to be there, to see people of all ages with Thin Lizzy t-shirts. Yes, there's a lot of controversy over the show - did Gary Moore's ego get in the way? An all-Lizzy guitars finale would've been wonderful. Robbo and Scott were at the same show, but they never played together. We may never get another chance to see that. But if someone really wants a different show, then let them try to book it themselves.

All photos are © Copyright 2005 Rick Jacobson.