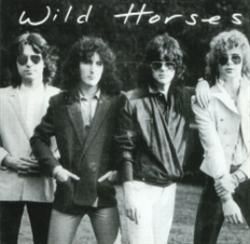 WILD HORSES was founded by JIMMY BAIN (Bass, Vocals, Guitar) and BRIAN (ROBBO) ROBERTSON (Guitar, Vocals, Bass) and came to life in the summer of 1978 after Robbo split from THIN LIZZY. Bain and Robbo had talked about forming a band together for about one year at that time, since the both of them had been sacked from RAINBOW and LIZZY respectively during 1977.

But as we all know, Robbo rejoined Lizzy for the "Bad Reputation" tour so the project had to wait until his commitment with Lizzy ended.

DIXIE LEE (ex-LONE STAR) was the first drummer to tour with WH, but the original drummer was KENNEY JONES who left to join THE WHO after Keith Moon's death. Lee was later replaced by session player CLIVE EDWARDS.

JIMMY McCULLOCH was the first guitar player, but due to ill health (drug problems) he was sacked and replaced by then unknown NEIL CARTER (WILDER). Kenney Jones and Jimmy McCulloch (ex-WINGS, STONE THE CROWS, the latter also featuring Maggie Bell on vocals and James Dewar, pre-Robin Trower, on bass) were both involved in a SMALL FACES live reunion prior to Wild Horses.

This line-up spent 1979 gigging in the UK and trying to secure a record deal, which they eventually did with EMI and the TREVOR RABIN produced debut album was released in the beginning of 1980 (and later re-issued in 1993 in Japan, and in 1999 by the now defunct UK label Zoom Club which also included a pair of bonus tracks].

THE FIRST ALBUM included the three singles "CRIMINAL TENDENCIES", "FACE DOWN" and "FLYAWAY", the latter sometimes, possibly incorrectly, being credited as having been written by BAIN with PHIL LYNOTT. The writing credits on the Zoom Club 1999 reissue credits "BAIN-ROBERTSON-GORHAM" for that track, and "BAIN-LYNOTT" for the song "DEALER".

NEIL CARTER left in October 1980 to join UFO; his replacement, JOHN LOCKTON, was not entirely unknown. He had recorded an EP with THE NEXT BAND, a trio that also featured bassist/vocalist Rocky Newton (pre-LIONHEART, McAULEY SCHENKER GROUP) and drummer FRANK NOON (who played on 'The DEF LEPPARD E.P.' and later joined LIONHEART, Wild Horses and STAMPEDE).

Both Leppard and TNBand had recorded their respective EPs at Fairview Studios in Hull. It's said that it was JOE ELLIOTT of DEF LEPPARD who suggested to BRIAN ROBERTSON the idea of JOHN LOCKTON joining WILD HORSES.

This second stable line-up of the band toured the UK and Japan, and in the beginning of 1981 cut the follow up album STAND YOUR GROUND (later re-issued in 1993 in Japan, and in 1999 by the now defunct UK label Zoom Club which also included a pair of bonus tracks]. Produced by KIT WOOLVEN and including the single "I'll Give You Love" the album wasn't the success everybody was hoping for and was shortly followed by an non-album track single.

This was a new version of a cover song which Bain and Robbo had recorded with STEVE ELLIS a couple of years earlier, "EVERLASTING LOVE". Despite a well known tune and good production by Phil Lynott, the single didn't make it and shortly afterwards Robbo left the band. Both Bain and Robbo had heavy drinking and drug problems at this time and were constantly arguing about the direction of the band.

Both ROBBO and CLIVE EDWARDS (ex-PAT TRAVERS, ELECTRIC SUN) left WHorses at around the same time, in June of '81 after their final show at the Paris Theatre in London (later released as the 'BBC In Concert' bootleg). But Clive did not really go back to session work - he joined a number of different acts, starting with former WHITESNAKE guitarist BERNIE MARSDEN's S.O.S., with whom he played the Reading Festival '82, LIONHEART and GRAND PRIX in that order.

Clive was also mentoned by Scott Gorham as the drummer for a proposed solo album around the time of 'Thunder & Lightning.' CLIVE had earlier subbed for BRIAN DOWNEY in THIN LIZZY when the band made a UK TV apperance to promote the 'SARAH' single.

The band became a five piece with FRANK NOON on drums, LAURENCE ARCHER (later in Philip Lynott's GRAND SLAM) on guitar and REUBEN ARCHER on vocals and they had a regular slot at The Marquee in London during the autumn of 1981, but without any success and without Robbo the band soon disbanded. From start to fininsh this was a vehicle for Jimmy Bain and Brian Robertson and by the end of '81 the magic was gone.

Jimmy Bain went on to DIO, Robbo to MOTORHEAD, Neil Carter to UFO and Frank Noon, Laurence and Reuben Archer went on to STAMPEDE. Clive Edwards went back to sessions again and the whereabouts of John Lockton is unknown.

Lockton only appears on the band's self-titled 1985 debut. VICTORY opened for GARY MOORE, probably on his 1988 Tour, later breaking up. CHARLIE HUHN is reported to have reformed the band again, but the details are sketchy at this point. 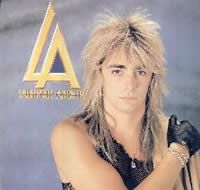 A posting to the Network of Wild Ones (NoWo) and written by SOREN LINDBERG, a recognized Thin Lizzy expert.