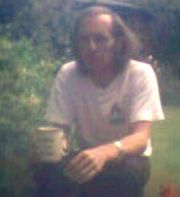 Recently I had the good fortune to chat with Andy Gee and hear some of his reminisences about his Thin Lizzy experiences. He has been kind enough to allow me to share them with you.

jt -- Some THIN LIZZY fans may recognize the name ANDY GEE from your short stint with Thin Lizzy for the 1974 German Tour. Being born in Berlin, in 1950, must have meant that your language skills were a definite bonus to the band as they toured in this 'foreign' land. How did it come about that you happened to join THIN LIZZY in the first place? 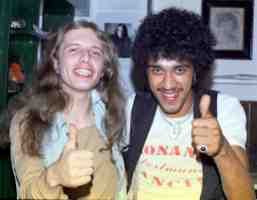 anDg -- I met Phil and Brian at a party in Bayswater and Phil mentioned they were looking for a guitarist. We did have a couple of rehearsals and I met John Cann. I think Phil wanted to solve the problem of the difference between the 'live' sound and the 'recorded' double-tracked guitar solos.

jt -- That was because prior to this Thin Lizzy had been a trio, with ERIC BELL doing the guitar duties. I've heard that GARY MOORE had briefly joined the band to replace Eric after Eric left, but ended up not staying, which was why Phil was looking for a guitarist at this time, I believe. Was this the beginning of the Thin Lizzy dual guitar sound?

anDg -- Solving the live sound problem was easily remedied by a '2 guitarist' line-up. Before I knew what was happening, we were on the overnight Ferry to Hamburg, me introducing the boys to some German 'Schnapps' and Lagers. I came off worse and promptly made our 'cabin' uninhabitable for the night ("well ill") 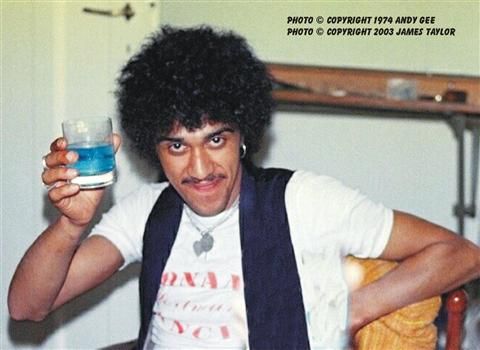 We looked pretty rough the next morning when we got off the boat and had to meet the President of Polygram (Germany). Someone laid on a decent breakfast, which for some reason nobody was interested in. {grinning}

I remember John didn't fit in too well. We knew he wouldn't, when after we arrived at a Hotel in the evening and Frank our personal roadmanager unloaded all the cases out of the car and John promptly asked Frank to carry his case to the Hotel. We all just looked at John, laughed, picked up our cases and left him standing there. ** (see footnote) I think John missed his girl and the good session money he was making in London. Instead he was travelling up and down Germany on the old 'autobahn' and stuck with us in the car. No 'superstar' treatment, just a bunch of guys getting on with it.

The gigs were going alright and something was happening. We were creating a bit of excitement.

I did a couple of interviews (made sense, as I speak fluent German) and pics were taken of the band by a couple of magazines, but I never saw any of the articles or pics.

After a while I did get fed up with all the routine Andy, can you book us in, translate the menu, can you ask for this and that and I refused to translate further, claiming that if I would not be German speaking, Frank would do it all anyway. After that I had a great time and really enjoyed the gigs, songs and company. 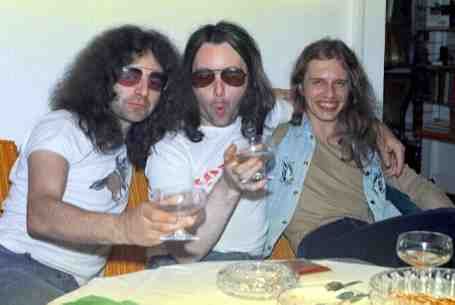 I took the band (incl Roadies) to my parents outside Frankfurt for a 'home cooked meal' and a potent 'Strawberry Punch' during the 1974 German tour. We had a good time and got pretty 'legless' as far as I remember. Well we must have. Most of my records were scratched after the visit.

I remember we were in a Hotel in the Luneburger Heide and Phil steamed into my room and said: Hey listen to this, I just wrote this song, let's play around with this a bit. He was playing me a section of 'Suicide'. So we jammed and finished it. Recently I found out that he had previously recorded it with Eric and must have just wanted to change Eric's contribution to the song. Funnily enough, I never got the chance to record it but Scott plays my solo on the recording. 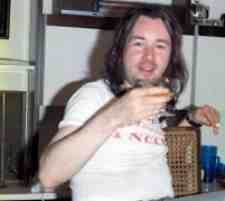 Next thing, Brian (Downey) wasn't too happy. He complained that the venues were no better then the previous german tour and that there was no point in continuing. That had to be it. When the drummer says he doesn't want to carry on, its time to go home.

We returned to London via Amsterdam and I had a couple of jams with alternative guitarists trying to replace John.

Already at that time, 'Whiskey in the Jar' was breaking in the US and Polygram were interested in signing the band. I still had a further 2 1/2 year to go on a solo contract with CBS left over from the ELLIS days and the groups management were not prepared to (as Phil explained to me) 'get into a legal hassle'. Legally It was alright for me to play 'live' with the band, but not to record without CBS' permission. They had some plan of me joining ROD ARGENT of 'Hold your head up' fame, who needed a singer guitarist. but I told them I'd rather emigrate to Canada, which I did in 1975.

Walking past the Marquee Club in Soho sometime in August '74, I listened to the new Thin Lizzy line-up and thought 'not as good as us', but then it's early days - give 'em a chance'. I actually saw Phil on very few occasions after that.

A couple of years ago I went to a 'Thin Lizzy Tribute' in London (had to pay full admin. price of Ł12, which annoyed me) , where I met Phils Mum, Philomena, who didn't quite know what to say or what to do with me being an 'unknown' entity. Amongst the memorabilia of Posters & records nobody recognised me or said 'hello'. Some looked at me a bit funny, but that's normal. So I just enjoyed hearing the old songs again. I felt sad that Phil could not be there to have a couple of beers with me.

On reaching my platform on the 'tube' to go home I saw something 'flashing' on the black floor and walked over to see what it was. It was a gold plate approx. 2x1.5 inches and as I turned it over it read: 'Enjoy Life - this is not a rehearsal'. It cheered me up a little and thought this is just the kind of thing Phil would have said. I've still got it on my key-ring to remind myself.

Back
or go to Biography page