A Dublin City Council commemorative plaque to Phil Lynott has been unveiled at the house in Crumlin, Dublin, where the late Thin Lizzy front man where grew up 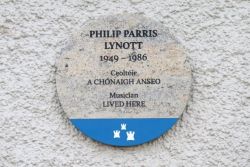 January 4 2021 will mark the 25th anniversary of the iconic Irish singer’s death from pneumonia and heart failure due to septicaemia after being hospitalised with serious drug addiction issues.

Lynott’s uncle, Peter Lynott, was the guest of honour at the unveiling, which was attended by a small gathering of friends and those who worked closely tie to the late musician.

“It’s absolutely fantastic. What a tribute to a great man, a very humble man,” Peter Lynott told the Irish Independent.

“Who would have thought 65 years ago when Philo and I were reading comics on the bedroom floor, that a plaque would be going up outside this very house?”.

He was joined by filmmaker Emer Reynolds, whose upcoming Phil Lynott documentary Songs for While I’m Away is due to be on St Stephen’s Day.

Speaking about the unveiling, Councillor Michael Mac Donncha, Chair of the City Council’s Commemorations & Naming Committee said: "The Commemorative Plaques scheme allows the City to formally commemorate people who have made a significant contribution to the life of Dublin.

"Through his music Philip Lynott brought happiness and joy to Dubliners and to fans all around the world. It is fitting that the City in which he grew up honours him with this commemorative plaque".

Go back to previous page