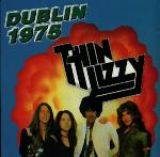 Fighting My Way Back

For Those Who Love To Live

Shades Of A Blue Orphanage (spoken)

Philips mother was in attendance at the concert.

Tracks 1-6 from National Stadium, Dublin, December 12th 1975 from a BBC (radio?) broadcast. Although this audio recording is only part of the show, apparently the entire concert was video taped by the BBC. Some sources show this, probably incorrectly, as December 10th.