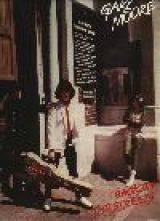 Back On The Streets - GARY MOORE (w/Phil Lynott, Brian Downey)