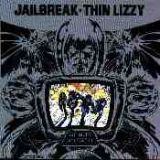 Jailbreak is the sixth studio album by Irish hard rock band Thin Lizzy, released in 1976. This album proved to be Thin Lizzy's commercial breakthrough in the U.S. The singles include "Jailbreak" and "The Boys Are Back in Town", the latter being Thin Lizzy's biggest hit. The band originally wanted to release the more pop-oriented "Running Back" as the first single, which may account for the song's accessible arrangement and production.