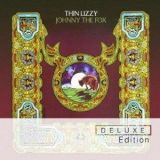 Have you ever wondered who the characters JOHNNY or JIMMY were inspired by? Well, here are excerpts from a couple of recent email messages that I've received, with possible explanations:

My Life in the Manchester Underworld by Jimmy Donnelly