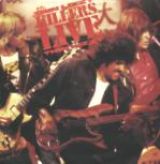 Tracks vary by Country of release.

6 tracks on the Canadian version.

Some versions of the 12 inch EP have this additional track

In Canada it was released as a 6 track 12 inch and includes:

Originally planned as an 8 track ALBUM: