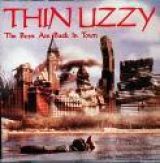 The Pressure Will Blow

Killer On The Loose

This Is The One

Dancing In THe Moonlight

The cover says Recorded Live in Concert 1982 but was at least part was recorded in 1981 at the Hammersmith Odeon, although some parts are from the 1982-83 FAREWELL TOUR.