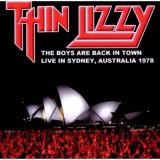 The Boys Are Back In Town (live 78 audio) - THIN LIZZY

on the 1978 Australian Tour

with Mark Nauseef filling in for Brian Downey

A review on Amazon.ca by "BowlingRon"

This review is of: The Boys Are Back In Town (Audio CD)

Let me start by saying that I love Thin Lizzy. This show (Sydney '78) has been highly bootlegged for many years...and this is supposed to be the first 'official' release...so one would expect a decent quality product...this is not the case ! The sound is crap. It is as if it has been pressed from a high generation bootleg cassette copy...hiss, bad mix, almost no guitar sound at all...basically, you hear vocals, bass and a little drums...not much else...the crowd noise is clearly faked (or added afterwards), because it just doesn't sound right. All of these faults I could live with, but even worse - who releases a live cd with GAPS between the tracks ! What a terrible release...recommended for the die-hard fan only...spend a little more elsewhere and get a decent bootleg version - I know the vinyl one I had back in the 80s was WAY better than this thing ! 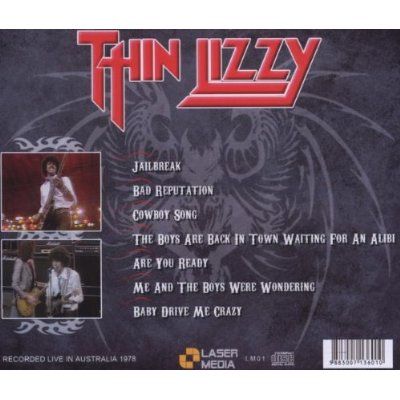 The Boys Are Back In Town
Back