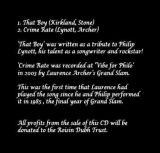 by Mark Kirkland and Jon Stone, aka

To coincide with the unveiling of the statue of Philip Lynott in August, Mark Kirkland and Jon Stone from 'Laurence Archer's Grand Slam'- more recently known as 'Nineteen', have recorded and released a tribute single in memory of Phil.

Using countless Thin Lizzy references, the song 'That Boy' was written in recognition of Phil's unique character and charisma and has already been given Philomena's seal of approval.

Also included on the CD is a recording of the Grand Slam song 'Crime Rate' recorded at the Vibe for Philo 2003. This version features some stunning playing from original Grand Slam guitarist, Laurence Archer.

The CD can be purchased initially from the band at

This email address is being protected from spambots. You need JavaScript enabled to view it.

All profits from the sale will be donated

to the Roisin Dubh Trust.