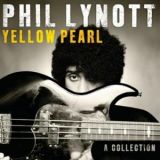 Late THIN LIZZY frontman PHIL LYNOTT's Yellow Pearl - A Collection will be released in the UK on August 16th 2010 via Spectrum Audio/Universal Music.

According to a press release, Yellow Pearl: A Collection brings you a delightful and intriguing trip into the solo work of Phil Lynott. It's guaranteed to hold the listener spellbound as they realise just how iconic Lynott was - and still is.

The release brings together the hits singles from both solo albums, Solo In Soho and The Philiip Lynott Album, including 'King's Call' (a tribute to ELVIS PRESLEY), 'Dear Miss Lonely Hearts' and major hit 'Yellow Pearl' which reached number 14 in the UK charts and also became the theme for BBC TV's Top Of The Pops show.

Also included is 'Parisienne Walkways', released as a single by GARY MOORE in 1978, reaching number eight in the UK charts. Written by Lynott – as well as featuring him on vocals – it remains a stand alone classic.

There's also B sides to the singles 'Together' and 'Old Town' (also included), these being 'Somebody Else's Dream' and 'Beat Of The Drum' respectively and his last solo single, 1985's 'Nineteen', released just a few weeks before his tragic death on January 4th, 1986.

"My aim isn't to surprise people, but maybe to surprise myself" Phil Lynott reflects whillst recording Solo In Soho, which comfortably reached the UK Top 30. The result was impressive, impassioned and imposing, an album that was a personal statement from one of the most original talents in the rock world. A musical hero, a master songwriter, a majestic singer, a monarch on bass - the proof is here that the whole was so much greater than the sum of these parts.

Tattoo (Giving It All Up For Love)

Ode To A Black Man

The Man's A Fool

Ode To Liberty (The Protest Song)

Beat Of The Drum