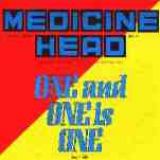 One and One is One - Medicine Head with Scott Gorham

Tracks: One And One Is One / Pictures In The Sky / Cadillac

Also released as a 7 inch single:

Tracks: One And One Is One / Pictures In The Sky

When John Fiddler left Box Of Frogs in 1986, he teamed up with Scott Gorham (ex-Thin Lizzy) and Pete Haycock (ex-Climax Blues Band) to form a band called Western Front.

They secured a deal with German label Bellaphon, who released one single with remakes of two classic Medicine Head songs, credited to Medicine Head rather than Western Front.

With the help of Box Of Frogs session musician Peter-John Vettesse (keyboards) and the former Reflex bass player Nigel Ross-Gilroy, Western Front finished recording an album and got three major record companies interested, but nothing happened - and the band called it quits in 1988.