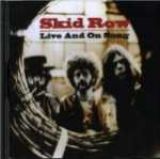 LIVE AND ON SONG

Formed in Ireland in 1967 by bassist & songwriter Brush Shiels.

on guitar and Noel Bridgeman on drums.

you can own these pieces of musical history and listen to the raw, emerging talent that went on

to become the legend that was Phil Lynott!

Live And On Song

and only ever released in Ireland on the independent 'Song Records' label.

It features Phil Lynott as vocalist on the first single and is his earliest & rarest recording;

single A-side plus their powerful live show recorded in London by the BBC in 1971!