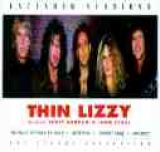 Other than Gorham and Sykes there are no credits as to band members, but the cover photo is the same one used on ONE NIGHT ONLY! from 1999 (also issued by this label).

do not feature Philip Lynott. They are also some of the shortest extended versions of songs I've ever seen.