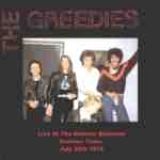 Waitin' For An Alibi

Back On The Streets

The Greedies started as a joke after some difficulties Lynott had with the IRS 'cause he hadn't paid his taxes in time. The idea was just playing small clubs and getting paid directly afterwards in cash.

The original idea was calling the band the Greedie Bastards, but later it was re-named the Greedies.

The first show was on the 29th July and was also a test for Gary Moore who just came in after the departure of Brian Robertson in early July. Then next day the band headed for America, leaving Brian Downey at home, but that's another story.

The first night features Lynott, Gorham, Moore and Downey, along with Paul Cook and Steve Jones from the Sex Pistols, as well as Jimmy Bain and Chris Spedding.

In the eve of Christmas 1978 the Greedies played again a couple of Gigs in the UK but also in Ireland. This time featuring (besides the Lizzy gang) Bob Geldoff and Johnny Fingers from the Boomtown Rats and again Steve Jones and Paul Cook.

The first and only single release by the band was recorded late 1979, after Gary Moore had left. Only Lynott, Gorham, Downey, Jones and Cook survived from the original lineup.

Special thanks to the MadMan for this info. 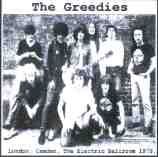