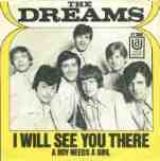 I Will See You There - The Dreams (with Eric Bell)

Cover shown was released by United Artists in Germany.


I Will See You There

A Boy Needs A Girl

ERIC BELL recorded several tracks with the DREAMS during 1968 and 1969.