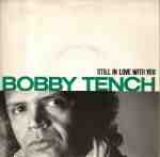 Still In Love With You - Bobby Tench

Heart Out Of Love

This 1986 release is a tribute record and features Brian Robertson on guitar.

Recently Robbo's manager Sören Lindberg disclosed that it was actually recorded as a Robbo solo single, but due to various contractual problems it was released under the Bobby Tench banner. Recorded in 1982 with Wild Horses track "The Stash" recorded for the b-side...

In 1991 Bobby Tench was the leadsinger in the band An Evening With THIN LIZZY Music which featured:

They did a small tour in Ireland only.