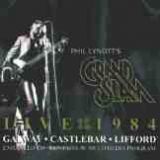 Night In The Life Of A Blues Singer

which was stolen from my website without my knowledge,

permission or compensation of any kind.

LOOK IN THE EYES previously performed in concert by THREE MUSKETEERS