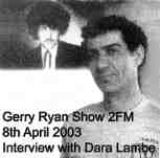 In 2003 Philip's son DARA LAMBE shocked the world when he came forward to announce that he was Phil's, till then unknown, son.

This is Gerry Ryan's interview, April 8th 2003, with Dara Lambe, right after his coming forward. Dara explained how he had set out on a quest to find his biological parents, circa 2000, and was surprised that his dad turned out to be Phil Lynott.