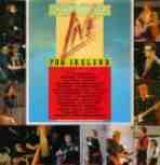 This live two disk vinyl set is a record and a recording of an extraordinary day in Irish social history -- May 17th, 1986. On that day thirty Irish bands stormed their way through a fourteen hour concert which gathered the biggest ever television audience in Ireland.

The song was recorded during the "Self Aid" Festival in Dublin They played also The Cowboy Song featuring Bob Geldof (Boomtown Rats) on lead vocals, which is not included in this collection.

Portions of this Double LP were also released as a single album.