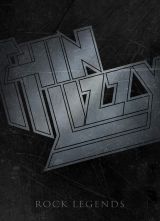 To celebrate 50 years of Thin Lizzy Universal are proud to announce the first instalment of an archive release programme that will cover the career of one of the most iconic and respected bands of the 1970s. Rock Legends’ is a six CD one DVD Super Deluxe Edition that features 99 Tracks in total, 74 of which are unreleased and 83 of which have never been released on CD or streaming. It is simply the ultimate Thin Lizzy boxset. Rock Legends’ covers the bands whole career over 6 discs newly mastered by Andy Pearce encompassing a raft of unreleased material including demos, radio sessions, live recordings and rare single edits. The track listing has been compiled by Thin Lizzy guitarist Scott Gorham and Lizzy expert Nick Sharp from a collection of newly discovered tapes most of which have never been heard before. The box is housed in a 10” x 6” slipcase and in addition to the six CDs contains a DVD with the hour long ‘Bad Reputation’ BBC documentary and the band’s legendary performance on the Rod Stewart ‘A Night on the Town’ TV Special from 1976. The set also contains replicas of the bands tour programmes bound into a hard-backed book, the very sought-after Phil Lynott Poetry books, 4 prints by legendary Lizzy cover artist Jim Fitzpatrick and a book containing quotes by all the members of the band about their experiences playing with Phil Lynott and Thin Lizzy. It also has a selection of famous fans such as Slash, Lemmy, Joe Elliot, Geddy Lee, James Hetfield, Ian Gillan, Henry Rollins, Billy Corgan, Bobby Gillespie, Craig Finn, John McEnroe and Pat Cash talking about the band.
Back