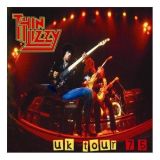 Recorded live at Derby College on their UK tour in November 1975.

This official release is fully authorised by the band and taken from the original radio recording tapes which have now been remastered and presented here with the full complete show comprising fifteen tracks in superb quality.

On Friday 21st November 1975 the absolute ‘classic’ Thin Lizzy line-up of Phil Lynott on vocals & bass guitar, Brian Downey on drums & percussion, Scott Gorham on lead guitar and Brian Robertson on lead guitar, recorded this superb concert at Derby College for a radio broadcast. The band had been on the road ever since releasing their ‘Fighting’ album in August 1975, and this recording captures their stunning live show in an intimate setting, giving the listener that front row sensation of a live band at the top of their game just months before breaking into to the big time with their 1976 mega transatlantic smash album ‘Jailbreak’.

The show, which was mixed live on the night, gives the set that raw and electric feel. The original recording from the 1/4" stereo master tape has been kept in amazing condition, transferred to CD, and now all fifteen tracks have been completely re-mastered under the band’s supervision.

The resultant ‘UK Tour 75’ album - which has been fully authorised by the band - will be released as a deluxe CD, containing a 20-page booklet of previously unseen live photos and exclusive liner notes written by Brian Downey, on September 8th.

One of the many album highlights for Lizzy fans, is an early prototype version of the ‘Cowboy Song’, which later appears on the ‘Jailbreak’ album and that Phil titles live as ‘Derby Blues’. The band also play a vibrant version of their early rock stomper ’Little Darling’ which was originally recorded by an earlier line-up of the band, and a song they dropped from their live set soon after this tour. All-time classic ‘The Rocker’ is here, plus many other songs from the ‘Nightlife’ and ‘Fighting’ albums that have never previously been released as live versions. You even get to hear the band jamming on their sound-check, just before the crowd was allowed into the venue.

Brian Downey recalls in the liner notes that “In 1975, the band had decided on a different attitude, to change to a harder rock sound. This album shows the band’s determination to do just that.

With success just around the corner and following tours in Britain and the States, the band are slick, raunchy and at the top of their game. Running at over 78 minutes, we get the full set and more from one of the greatest rock bands ever – Thin Lizzy.

Heaviest rocker on the album

Phil joins both tracks in a rock attack medley

version yet to be released!

Didn’t get released until April 1978 as a B-side on a UK 7"single/ ‘Rosalie, Cowboy Song live medley’,

so probably the earliest version yet to be released!

An ultra rare prototype version as the track was not yet recorded and which Phil titles here live.

Previously recorded by the old line up in 1974 and one of the last times ever played by the classic line up!

Unique for any sound check to be partially or wholly recorded for album release. This version is a

12 bar-blues riff which contains nice lead solos from both Scott and Brian. The audio engineer managed to

get the tape machine to record as the band jammed on stage just before fans were allowed into the venue.

included in the deluxe DVD/CD version of "LIVE AND DANGEROUS"