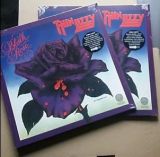 with bonus tracks that include 1978 Good Earth demos of the tracks on disk 2.

1. Do Anything You Want To

4. Waiting For An Alibi

4. Waiting For An Alibi (Demo)