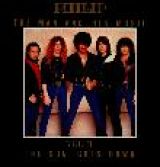 Philip - The Man And His Music - Volume II

The Man and his Music, Vol. II

The Sun Goes Down

Rock N Roll With You

With Love (from the Jailbreak album)

Just The Two Of Us (second single from Black Rose** album)

** Although the details are not readily available, it is reported that the Black Rose

album as we know it today is not the original release. Apparently at some point after

being released, it was withdrawn and some tracks were removed and others added

before it was reissued. Just The Two Of Us, released on a single, was apparently

one of the cuts from the original release of the album.