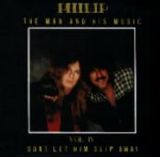 Philip - The Man And His Music - Volume IV

The Man and his Music, Vol. IV

Don't Let Him Slip Away

2. Look What the Wind Blew In

3. Return of the Farmer's Son

6. Things Ain't Working Out Down on the Farm

7. It's Only Money (alternate version)

9. Still in Love with You (different lyrics)

This CD has also been released as a CD-R with the same front cover art (but without the inside liner notes), and

in Japan on the Lookin' Ahead label, catalogue number 026.