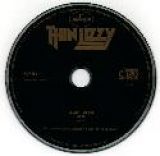 Also released as a CD-EP

Also released as a promo CD-SINGLE featuring only the song DEDICATION.

This recording of DEDICATION was probably started by Philip with GRAND SLAM. Through the magic of modern recording techniques it was completed by Brian Downey and Scott Gorham after Philip's death. Some say that Gary Moore was also involved, but that seems to be incorrect.