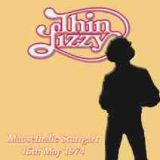 with Andy Gee and John Cann

Gonna Creep Up On You

Rock 'N' Roll With You

This is a CDR release. Excellent soundboard stereo recording.

Apparently GEE and CANN only had a couple of days of rehearsals before embarking on this tour. They were recruited to replace Gary Moore after his sudden departure. He, in turn, had been filling in for the recently departed Eric Bell.

For more information about Who is John Cann?.... be sure to visit my Johnny DuCann page.

For more information about Who is Andy Gee?.... be sure to visit my Andy Gee page.